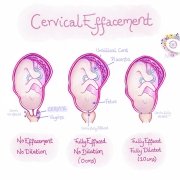 In a previous blog I posted all about the amazing uterus and how it works, so following on from that is all about what your cervix is doing in pregnancy, labour and birth and why its doesn’t always indicate how long you have to go to meet your baby.

The cervix is an impressive part of the female/birthing persons body.  During pregnancy one of its primary jobs is to protect the development of the baby and the uterus during pregnancy by remaining closed and is plugged with mucus.  During labour it then has to move forwards, soften and open and allow a baby to move through it and be born.

During pregnancy, the cervix is like thick cartilage (a bit like the end of your nose), closed and plugged with mucus.  It is between 2.5—3.8cm long and starts off pointing towards the back wall of your vagina.  As your body starts getting ready for labour and birth, it will release hormones called ‘prostaglandins’. Interesting enough popping paracetamol in early labour may actually inhibit the production of  this important hormone, which may mean that it takes longer for labour to progress have a read of some of the studies that have explored this.

So, what happens in labour?

There is so much more that happens to the cervix in labour its not just about dilation.

Position
To protect the baby, the cervix points towards the tailbone (posterior) during pregnancy, and sometimes even early labour. Then the cervix will move forwards (anterior) which will bring it into line with the vagina to allow the baby to move through more easily.

Ripening
If you touch the tip of your nose, that’s feel very similar to the texture of a closed, uneffaced cervix. That’s no good for dilation, and it has to soften, or “ripen” in order to do its other jobs. This primarily happens before labour, but can happen throughout labour as well. The texture of your cervix must work its way to the softness of your relaxed lips, and then softer still to match the texture of the inside of your cheek.

Effacement
Hold up your pointer finger. Touch the second knuckle. From there to the tip of your finger is about the length of your cervix. In order for the cervix to dilate completely, your cervix has to shorten, or “efface,” completely. This is measured in percentages. If your cervix only reaches from the tip of the finger to the first knuckle, you are about 50% effaced. This process must happen before dilation can even occur. For someone experiencing labour for the first time, effacement or shortening will happen first, then dilation will follows. For those going through labour for a subsequent birth, it will often occur at the same time as dilation

Dilation
Last, but not least we have dilation. Your cervix must open up from a tightly closed position, all the way up to full dilation, which really isn’t 10 centimetres. At this point, no cervix can be felt as it would just be the baby’s head. So it is often called “complete dilation.” The thing to realise about dilation is that it cannot happen unless the cervix is moving, ripening and shortening already. They often happen seemingly in tandem, but sometimes there might be a pause while the cervix is effacing, softening, and moving forward. The important thing here is to not get disheartened if you are told when you are in labour and are ‘only’ 3, 4, 5cm…. your cervix is still doing its splendid thing and you will get there!  And just to clarify, your cervix will not dilate fully and leave a gaping hole just there, waiting for baby to come through.  Rather, it peels back over baby’s head so it moves upwards not outwards – a bit like a polo neck jumper moving over a baby’s head.  The dynamic movements, rotations, sways and rocks your body will instinctively do during labour all help aid this process of dilation, helping the cervix ease open over baby’s head with each contraction of the uterus. 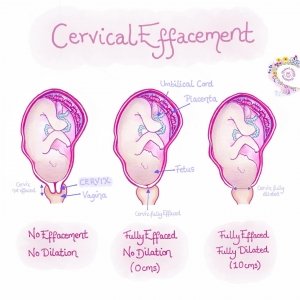 As we can see, the cervix has many jobs and every woman’s cervix will work differently. As Maria Pokluda says:

“Let me let you in on a secret, your cervix is not a crystal ball.  It cannot predict when labour will start. Nor can it predict if you will deliver before, after or even on your due date.  The cervix can do many wonderful things, but let’s not give the cervix more credit than it is due.  A cervix cannot predict the future.”

So, no your cervix can’t tell you when you are going to give birth, but you can see progress in many ways.  When in labour, rather than thinking only in terms of numbers of dilation – ask your care provider to tell you if it is anterior, or how thin or effaced you are.  This will mean you can see your progress and not be discouraged if on examination you are ‘only’ 4cm. Think instead – ‘Yeah!  I’m 4cm – my body is amazing!  Look what I’ve done already!’.  The length of labour and birth is different for everyone: a completely dynamic process.

So try not to get too hung up on numbers, as the whole purpose of contractions is to move the horizontal muscles of uterus upwards and increase the strength of the top of the uterus (fundus), which will when it is ready move the baby down and out. Without the right thickness of fundus there won’t be enough power to get baby out.

So really the cervix doesn’t dilate outwards but upwards as a result of the effort to pull muscles up into the uterus during each contraction to move them up to the fundus (see image below). 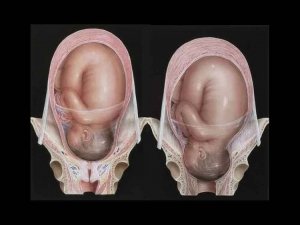 Image of uterus and fundal muscle by Nova Birth Services

Some further reading about the cervix and vaginal examinations:

There are many ways to understanding progress in labour and this is a useful blog to read to understand more: The purple line of dilation

Whether you decide to have a vaginal examination in labour is always your choice have a read of this AIMs article: Vaginal Examinations in Labour

Want to join the discussion?
Feel free to contribute!

You are not allowed to not allow me

Comfort Measures in Labour: Gas & Air
Scroll to top
XWe use cookies on our website to give you the most relevant experience by remembering your preferences and repeat visits. By clicking “Accept”, you consent to the use of ALL the cookies. However you may visit Cookie Settings to provide a controlled consent. Read MoreREJECTACCEPTCookie settings
Cookie Policy

These cookies collect information about how a visitor uses a website but they don’t collect any information that can identify the visitor. _gat - this cookies is installed by Google Universal Analytics to throttle the request rate to limit the colllection of data on high traffic sites.

Save & Accept
Powered by